"Royal" Ursuki - Reverie of the Heartwood

"Royal Capricorn" Ursuki - Reverie of the ???

Golems
​Golems are created, not born. No amount of wishing will create a Golem. How they are created is a selfishly guarded secret, lost to time. Due to their unique nature, existing characters cannot be converted into Golems.

​Golems are traditionally crafted of natural, non-precious stone. Their bodies take on a segmented appearance to allow them free movement. All Golems have runic conduits that disperse the energy from their Runic Core throughout their bodies.
​A Golem’s runic color will always be present in their Eyes, Runic Conduits, Runic Core and from any cracks in their stone. Think of their Runic color as emanating from inside them like the light from a candle!

​A Golem’s Runic Core does not always have to be placed in their chest. They can appear elsewhere on the body as well and be more or less protected, but must always be visible.

Golems are not beholden to the normal anatomy rules for each species, meaning they can bypass certain trait and marking rules. Markings that would normally be mandatory on a species (cheek and knee spots, eye markings) are not required on Golems.

A Golem’s Runic Core is responsible for bringing cold stone to life. In order to craft a core, runic material must be distilled down to its base elements through a meticulous and forgotten art. While any runic material works as the base for a Golem core, some believe that more powerful Golems are created by using harder to obtain materials.

Runic material can be obtained from a variety of sources, including but not limited to: runic flowers and crystals from the Dawn Garden or the Lucid Altar, runic spots on the species of Bellacoste, or even from the runic streaks found in a Fulgulisk.

Runic material can be gathered from willing sources, but is not always obtained ethically– but where your Golem’s core came from is up to you. Due to the sensitive nature of this topic, please be sure to follow the PG-13 rating of our site and remember to place trigger warnings on sensitive submissions.

While a Golem’s outer casing can simply resemble the species they’re associated with, those that created them didn’t always follow the rules. All Golems have access to all species traits and features from Common - Enchanted rarity.

​Golems were not created to be sentient. However, many are created using runic material taken from living and deceased Bellacostians. Over time, they sometimes pick up on the memories and personality of the Bellacostian their Runic Core was created from.

This has unintended consequences.

Every so often, a Golem will gain sentience. Some will start life afresh, while others will find themselves bogged down by memories of a life they didn’t live. It can be a confusing situation for a newly-awakened Golem, and many were decommissioned and left in Brouzet due to what, at the time, seemed to be an irritating bug.

Golems possess limited magic, though some can be trained over time to expand their use of the magic powering their bodies. Unlike their creators, Golems are generally only able to use magic for limited offensive and defensive purposes.

Magic keeps a Golem moving, so they must be careful not to expend it frivolously. Some are more powerful than others, but all Golems possess what some consider a major flaw: they cannot fly or withdraw their wings. 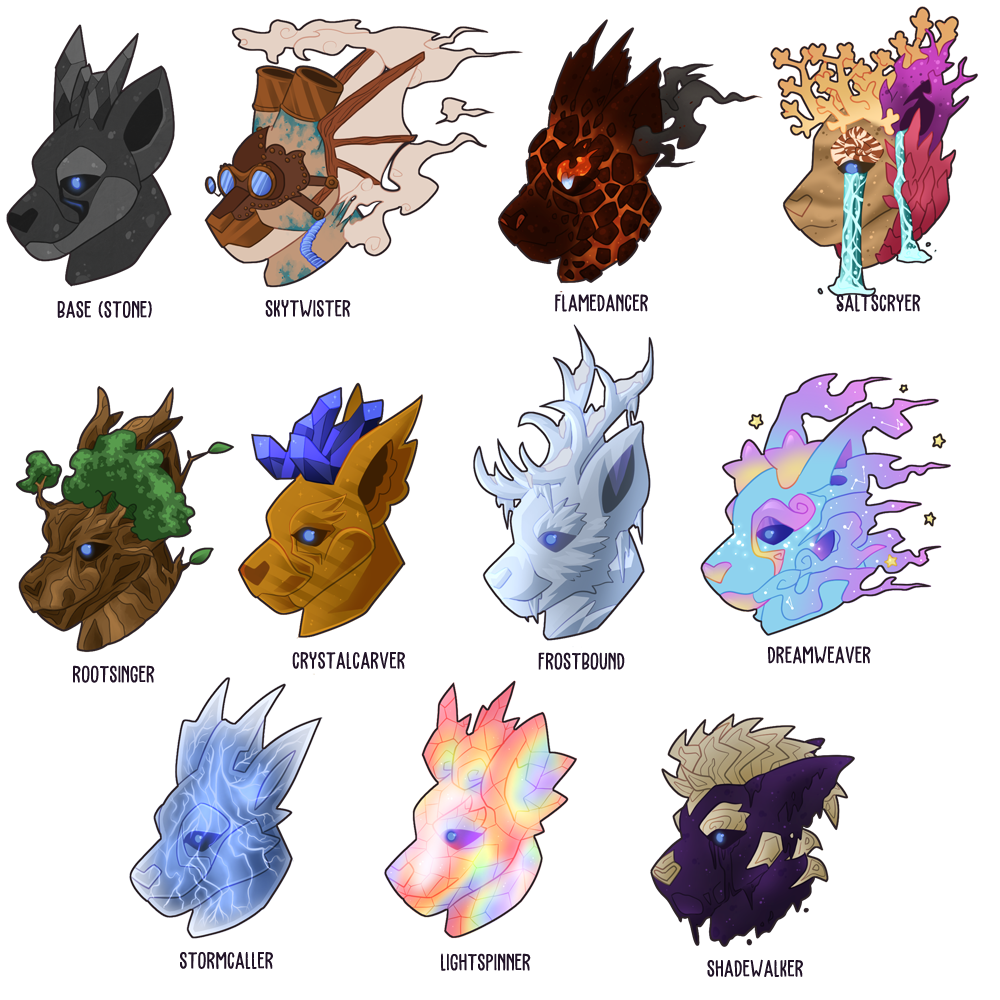 A Golem can be infused with elemental magic to bolster their Runic Core. Affinities can drastically alter the appearance of a Golem’s casing, as well as give them elemental magic to pull from, granting them a wider array of arcane prowess.

The Golems pictured above are merely examples! The Affinity possibilities are nearly endless– if you have an idea different from our examples, don’t be afraid to ask us if it’s possible.

Before you get started, remember: all Golems must consist of some sort of solid material, either entirely or as keystones holding less solid parts of their casing together. For example, the Shadewalker Golem is comprised of fossil keystones holding the tar-like ichor in place. All Golems require structure of some sort and should not be entirely made of an element!
Got questions? Check our Golem FAQ!