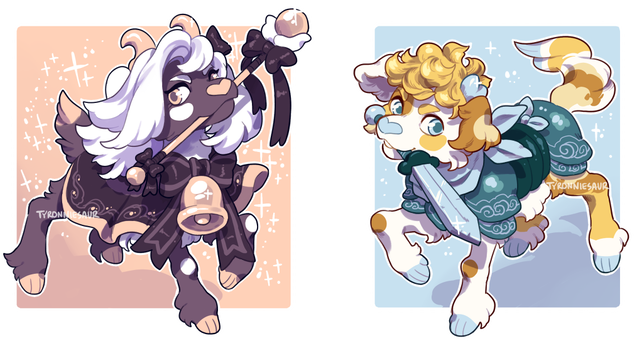 Options for primary and secondary schooling for young pouflons tend to vary depending on the area- Chrysanthos and Roseacre have many schools to choose from, while most villages in Goldfair will only have one. Early education for pouflons isn't strongly overseen by the state, so every pouflon's educational background is different. Later education is just as varied- there are many institutions dotted across the map for all kinds of pursuits, but the main schools for Knight and Mage careers are as follows:
The main academy for knight training. A fortified establishment, the Academy doubles as a guard point, watching the pouflon border with the Ebony Wreath. The Academy also services the mining town it's built in- students patrol the mines and are expected to help the miners and the rest of the community as well.
​
Days are long and regimented for knight students. After a long hearty mix of exercise, weapon practice, and patrolling quotas, most students are wiped out by the time they turn in for the night. Mentors give to and expect much from their students, but a sense of camaraderie between them and all their mentees can be easily felt even by an outsider. Students hold trust in each other and in their mentors, working as a team.
The most prestigious option for mage training. Tuition is high, but young pouflons are encouraged to attend as Asterfall's curriculum is generally considered to be the standard all other schools are held to. Students' days start early and are packed with mandatory courses in their first year, leaving them with only a few leftover hours in the day to study, but schedules begin to loosen up slightly in later years when students are allowed to choose which courses they attend according to their magical interests.

​   Walking the old halls of the college and studying the works of well-established mages, students feel a strong pressure to perform. The rigorous schooling is enough to drive some students out, but those that weather their courses emerge as confident mages, well read and versed in all manners of classical magic. These respectable alumni almost always easily find an application for their magical expertise working with the state or with the school.
An alternative option for mage training. A much more affordable option than Asterfall Mage College, student schedules are also more flexible and there is an emphasis on individual, self-driven learning. Classes are quite small and teachers and students usually forge close relationships. The school's vast library holds various editions of well-known books as well as more obscure, unregulated reading material that wouldn't be found in Asterfall.

Students of this school tend to become more experimental and innovative mages, building on the work of their elders and peers, and contributing new ideas to the active magical field of study. They are just as welcome to pursue their own unique areas of interest and often become specialized in largely unknown applications of magic, sometimes even delving into darker magics.​
​
A much younger institution than Asterfall Mage College, Riddlelock Mage School has yet to earn a full sense of respect and acknowledgement from its counterpart- though exceptional students are sometimes headhunted from Riddlelock's ranks and offered a place at Asterfall. A fundamental difference in attitudes towards magical study maintains an air of tension between the schools.
Magic

Magic is a very important aspect of pouflon society - it is used for everything from aiding small domestic tasks such as writing to performing complex spells and making potions. While some pouflons are naturally born with a talent for magic, it is possible for pouflons to study and practice with magic to improve their skills.

Magic as it is used by mages is categorized into four tiers; the first tier is mostly innate magic, whereas the others require some amount of magical training. Pouflons accomplished in magic can prove their accomplishments by taking a magic assessment in Chrysanthos, earning themselves their respective tier medal.

By participating in Mage quests, you can earn Mage EXP for your character, which can be used to level them up through the tiers!​

Click HERE to see the Mage quests!
There are three different divisions of mages that a Bellacostian can choose from, they are as follows:
Knight

While almost all of the inhabitants of Bellacoste have potential in magic, some choose not to pursue a magical career; instead, they train and strive to become knights. Knights are the driving force of pouflon society- they do everything from running errands to deliveries to upholding justice across the land. Pouflons that are serious about a career as a guard often travel to Obrille, a mining town renowned for their knight training academy.

Knight tiers are primarily organized by capability, but also by societal importance. As a pouflon ascends through the tiers, they will find that each tier is regulated more strictly than the last; pressure is put upon knights of high rank to always stay honorable and ethical, and never to take advantage of their power.

By participating in Knight quests, you can earn Knight EXP for your character, which can be used to level them up through the tiers!​

Click HERE to see the Knight quests!
There are three different divisions of knighthood that a Bellacostian can choose from, they are as follows:
Affinities

Using the power of their given affinities, knights and mages have advantages in their strategy!