One day, while brewing an experimental potion, Amayllis accidentally creates Pippets- cute little creatures based on fruits! When Kit comes to visit his friend, they all get scared away and disperse over Goldfair, undoubtedly bringing mischief along with them.

This is an introductory comic for Pippets and their corresponding event prompt in the deviantArt pouflon group.
​featuring Ducky's pouflon, Rowan!
An Unusual Discovery

Welcome to the World

The vespire groans softly, rolling over and running her claws down their face. “A few more minutes, Romulon.”

The smell of breakfast wafts in from their small but serviceable kitchen. That was what life was like in Fluorspar-- small, but serviceable. The town of outcasts and pariahs was made large not by its size, but by the indomitable spirit and love of the people who inhabited it.

“Darling, please,” the underlying electricity in their beloved’s voice takes the vespire by the heart and they open their eyes. “I have your breakfast and… and Vespilet! The post came. There’s a letter for us… I was hoping we could open it together.”

“A letter?” the vespire asks groggily, tail curling up to wave lazily at the pouflon while they stretch, yawning. “For both of us?”

“Yes!” the pouflon answers excitedly. “It’s tied up with ribbon and sealed, see?” A tray of pastries settles daintily on their nightstand, the bound scroll whisked off it with a whiff of magic. “To the esteemed Vespilet & Romulon,” reads the pouflon before they flick the scroll, sending it to land lightly in Vespilet’s lap. “Love, I think it’s…” the pouflon swallows thickly, then smiles. “I think it’s a summoning! I think that I should go alone-- you stay here and set up, okay?” It would be safer that way.

“Romulon…” the vespire murmurs, frowning. They look down at the sealed scroll, picking anxiously at the wax seal that guarded the secrets within. “Shouldn’t we--”

“Vespilet, it’s far too dangerous for us both to go to the Capitol, I’ll be quick and safe, I promise. Our own bloom-- can you believe it?” The tap of Romulon’s hooves echoes through their modest bedroom. The pouflon flings their wardrobe open and whisks out a dark cape. “I’ll wear this, nobody will think twice. I’ll be fine!”

“*Romulon*,” the vespire says again, holding up the scroll. “Can we open it, please?”

The vespire smiles and beckons the pouflon to them. They share a long look, smiles wavering before they touch foreheads. “Together?” Vespilet asks. “Together,” Romulon affirms.

Together. They each take hold of the ribbon, and together they pop off the seal, letting the ribbon lay where it fell. The scroll unwinds. 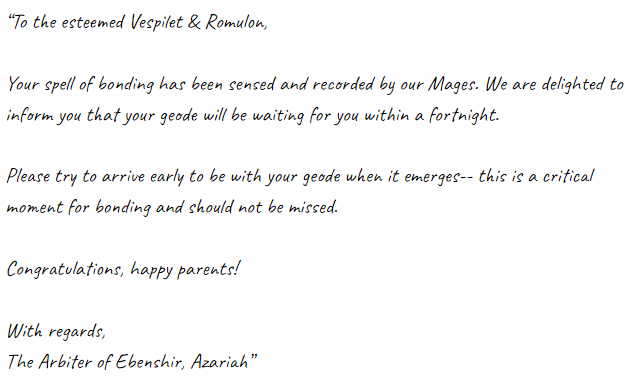 ​“...Vespilet?” Romulon’s voice breaks the silence that fell over their home. “...This isn’t from Chrysanthos, where…”

“Banelaire?” the pouflon responds, stunned.
Under the cover of darkness the couple traverses the streets of Banelaire, hooded and cloaked against the heavy mist and heavier eyes. Vespilet leads the way, an anxious Romulon at their heels. The pouflon hadn’t understood, and Vespilet hadn’t known what to tell them.

How do you explain-- how could *they* explain…

“Where are we?” the pouflon asks.

The vespire looks back, taking their hood down at last. “We’re almost there, my love. Almost there.”

Guards meet them at a towering gate. Vespilet hands them the summons that had been delivered just days ago. The precious parchment exchanges hands and the gates swing open, revealing the heart of the city just beyond.

The joined crystals of every vespire hums as if to greet them, a sound that reverberates in Vespilet’s chest as they return the call almost instinctively. Their beloved stands stunned by the glittering colossus that was the Lucid Altar, a multitude of colors swimming in their vision, refracting on the walls. “Vespilet, it’s…” *beautiful*.

The vespire smiles back at them before beckoning them forward. “Romulon, come on… they’re here!”

Vespilet could *feel* the tug, their heart about to burst as they pick their way carefully through the room. They wanted to run, to leap, to sing their joy now that they could *feel* the draw of their little one, but the sanctity of this place held them back. “Over here,” they instruct, carefully pulling a couple of broken rock shards away. “This one!”

The vespire grasps a rounded rock in hand and turns to present it to Romulon. The pouflon settles back on a heel, ears flicking with uncertainty as they look from the geode to the room around them. “Are you sure?”

“I’ve never been more sure of anything.”
It took time. It took coaxing. It took the gentle guidance of those that guarded this sacred place. But before long, they could feel the creature inside the geode. Even Romulon began to feel the pull, after a while.

“It’s warm,” Romulon told Vespilet one morning, their eyes sparkling. “I can feel it.”

Vespilet came to their side, reaching out to place a palm against the normally cool stone. Their breath catches in their throat and they smile, “Yeah… it is!”

A few hours later, their geode began to hatch. Gently they coaxed, as they had been instructed. The first glimpse of a tiny claw had Romulon chomping at the bit to break the whole thing open, but Vespilet calmly held them back. “Not much longer. Not much longer, little one.”

It wasn’t much longer, at all.

The geode that emerged was unlike anything Romulon had ever seen. A creature of claws and hooves. A cracked mouth capable of crushing rock, but a soft little nose. “They… they look like you,” is all the pouflon can say, eyes brimming with tears. The geode chirps and the pouflon buries their face in Vespilet’s soft mane, sobbing and laughing quietly. “They’re beautiful, they look like you, they’re the most beautiful thing I’ve ever seen in my life, Vespilet, they look like *you*.”

The vespire leans into their partner, tears swimming in their eyes as well. “They look like you, too,” they say quietly, leaning over to pick up the small… so small… geode. “Hello, my heart…”

The parents cried quietly, sharing their joy and bringing their geode to their chests, welcoming them to their family.

“Your little one will face hardships,” comes a voice from behind them. When they look they see the Arbiter, looming and imperious-- but she smiles kindly at them, at the child cradled between them. “Their kind is not known beyond the Wreath. They won’t be welcomed past Obrille.”

The cautionary warning sends a shock through the proud parent’s hearts. Eyes still swimming, they turn to face the queen of Banelaire. “We aren’t, either,” Romulon manages at last, ears against their head.
“Well then,” the Arbiter responds, “Welcome to the world, Bread.”
Sky Fall 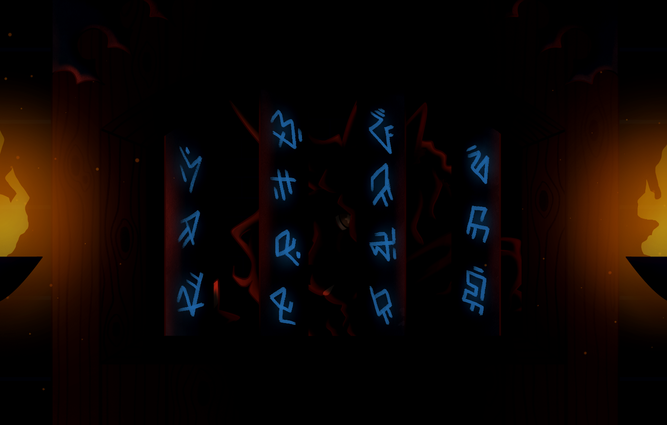