Vespires can eat almost any kind of solid earth material – rocks, minerals, gems, and jewels all sustain their diet, which they mine deep into the Ebony Wreath mountains to obtain. However, they can only absorb magic from gems and jewels.
​
A vespire's stomach works like a furnace; rocks and minerals that have a lower melting point are easier and faster to digest, while gems and jewels with higher melting points take longer to digest, and their magic is absorbed slowly.

Spry types are long and thin making it easier to slide through tight tunnels while mining for precious stones.
​
Svelte types are what one would call the average vespire; they are agile and excel in speed and climbing.

Stocky types are built with strength in mind; large barrel chests, large foreheads, and even larger claws. They excel in strength, digging, and excavating.

A vespire's runic color always shows up on their irises, filigree, and the inside of their mouths (tongue and inner mouth).

​Optional runic color points are the tail tip, claws, and wing tips. The runic color isn't required in these spots, but show up often! 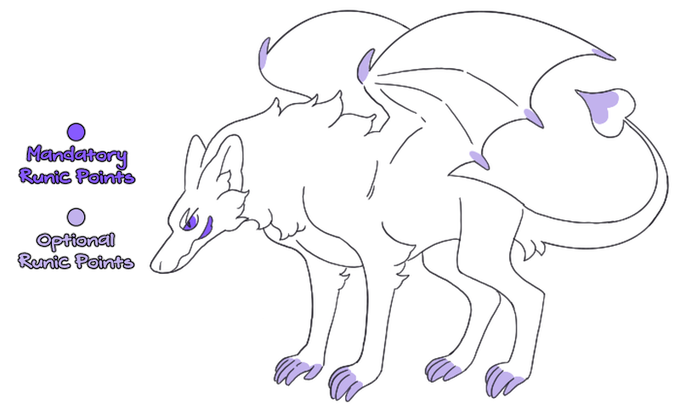 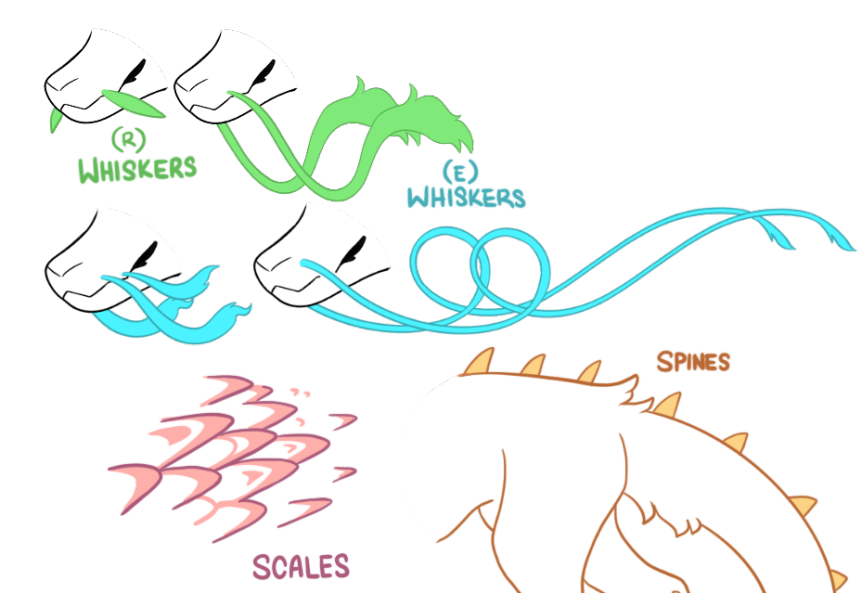 Geodes
Geodes are unable to speak when they are young, instead, they utter small crocodilian chirps. When they are scared and want to call their parents, they puff up as big as they possibly can and let out these little calls. Additionally, their ears are generally floppy upon hatching. They start to stand up fully after about a month.

Unclaimed Geodes remain at the Altar in Banelaire until they are either retrieved or come of age. At this point they are given a choice-- remain as part of the Strata of Ebenshir, or venture out into the world. Some remain, and some take their chances beyond the city walls.

Looking to grow up your geode? Take a look here!
Lifestyles

A group of Vespires is known as a Strata. While larger, more established Stratas are household names, a group of even two Vespires may call themselves a Strata. Family and camaraderie are deeply important to Vespires-- though their Strata may not be made up of blood relatives. Their definition of family is loose-- anyone a Vespire feels kinsmanship with may be included in their Strata, including hybrids, pouflons, and ursuki.

​  Each Strata has its own mark-- a trinket or tattoo that the members bear proudly. A mark can be worn on any part of the body, as long as it’s displayed. A Strata is meant to be for life, though this isn’t always the case. Some struggle to find a bond that’s unbreakable. Some Vespires drift for most of their life, seeking but not finding. Vespires without a Strata are not uncommon, but are often pitied by others.

​  When governing decisions of great importance must be made, a call is put out to all Vespires. A Rally convenes in Banelaire, headed by Azariah. Each Strata can choose to send a representative who will stand for their interests. When a Rally convenes, the topic will be discussed amongst all of the representatives before being put to a vote. The Arbiter presides over it all, ensuring that nothing gets out of hand.

All Strata may send a representative to any Rally, no matter how big or small. This is sometimes contentious for larger Strata, who may believe that a larger group means a larger sway. This is true outside of Rallies, but the Arbiter holds firm.

Banelaire Rallies are not always harmonious, but the Strata of Ebenshir does everything it can to maintain the peace until the issue is resolved and the Rally ends.

Vespires love to sing, most often communally, deep beneath the earth. Their voices fill their tunnels and caves, reverberate throughout their cities, and bring their Strata together. Deep baritones and soaring sopranos weave together, resonating in the stone and crystals that make up their home. The very earth thrums around a group of singing Vespires, bringing them peace and forging deeper bonds within their community.

When a Vespire’s crystal crumbles to ash, their Strata gathers to sing their story. This practice is called the Lifesong. Together, a Strata draws from their communal memory, singing the life of their fallen comrade and paving the way for their next journey. This retelling of a Vespire’s life is so important that Vespires will often gather even for the Strata-less, singing what tales they know or can make up about the fallen.

If a hybrid, pouflon or ursuki belong to a Strata, the Vespires will often gather to perform their Lifesong as well. It is not seen as culturally important to some, but others feel very strongly about the non-vespire members of their family. It’s a final show of love and respect.

Hybrids are most often already near adulthood by the time they reach the Ebony Wreath. Vespires are not welcome in the Dawn Garden, so parents are often barred from collecting their child. Most do not even attempt it, knowing that doing so may mean their death.

Very rarely, a hybrid will be born at the Lucid Altar. Pouflon parents are not discouraged from collecting their child, though it’s preferred if the Vespire parent is present.